Kakuei Tanabe (age 60), a female Kodan-shi, has created this documentary film based on the real-life experiences of elder care for her mother, mother-in-law, and father-in-law. In general, when we talk about dementia care in Japan, we tend to imagine “distressful, hardship, suffering… etc.”, however, this moving family drama is full of not only tears, but also laughter. Kakuei has a keen and unique sense of mentality toward elder care based on her three such journeys. It is 24 hour a day work and involves every member of the family, but she added essences of laughter and fun to mix the hardship and laughter into an exquisite balance. “I had seldom talked with my grandfather and he had been almost a stranger to me before I started his elder care”, Kakuei’s daughter Ginya who is also a female Kodan-shi, said. Involving Ginya and other family members, they are strengthening the family mutual bond through the elder care journey. 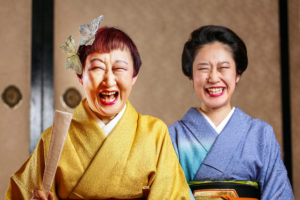 As soon as the movie starts, Ginya, who is Kakuei’s daughter and also a female Kodan-shi, plays an excellent role in introducing what a Kodan is. Next, the main stollyteller, Kakuei Tanabe shows up and starts telling her original Kodan “Dementia Café”, and “Kaigo Kodan (Kodan on Elderry Care) follows. The finale of Kaigo Kodan shows actual video of Kakuei’s father, something only possible in nonfiction. The screen reflects the real Tanabe family of grandfather, mother and daughter. A conversation between mother and daughter follows. They tell their family members’ mutual bond, which is woven with tears and laughter. 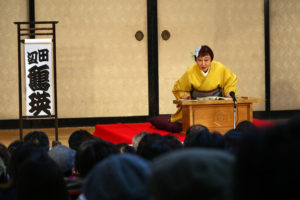